Fishermen (On the way) 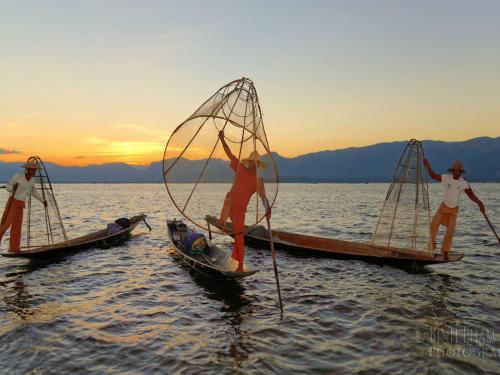 The fishermen of Inle Lake have evolved an eccentric method of rowing and fishing especially suited to local conditions (the water being both shallow and very clear). By propelling their craft from the bow, they can watch for approaching patches of tangled weeds and, more important, are able to see tell-tale bubbles and then pounce on the unsuspecting fish. And with only one limb engaged in providing locomotion the rest of the body is free for the business at hand: the fisherman uses his legs to push home the conical-shaped net. 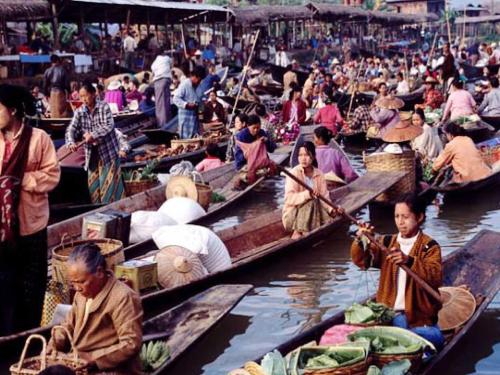 The daily market on and around the Lake rotates to five different locations, now a huge affair which caters to both the locals and visitors. The Inthas? wealth is derived not only from their market gardening activities, but also from lucrative craft industries, notably the weaving of delicate silk fabric much of which is made into wedding longyi as well as other garments. The area is also famous for lotus-thread weaving, Shan shoulder bags, beautiful thick Shan longyis as well as the production of fine silverware and cheroots. 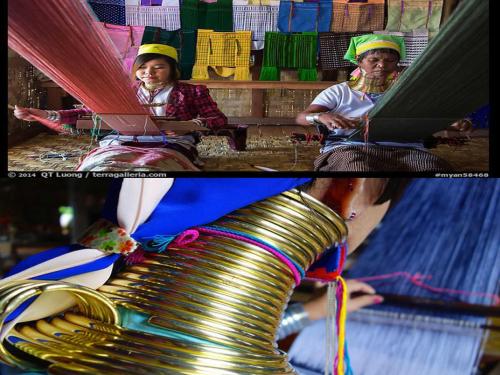 The largest village built on the lake is Ywama. Its streets are a web of canals, each piece of ?land? connected by arched wooden bridges and causeways. This is a rich community, and its teak houses are generally handsome, two story affairs. Of all the ethnic groups who live on and around Inle Lake the most startling tradition and ?dress? is that of the Padaung womenfolk who wear gold rings around their necks and ankles. From the age of six or seven a new ring is added each year. Several theories are offered on the original purpose of this custom, one was to repel prospective kidnappers, another to repel attack by tigers that when killing a human go for the jugular, or some say simply to enhance their beauty. 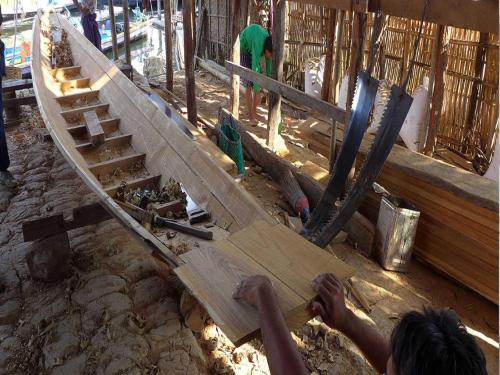 This village, houses the boatyards, both for new craft and repairs. Everywhere is the tap-tap of hammers and the noise of saws. It takes a boat-builder four days to make the dug-out canoes and four weeks for the long boats. The boats are constructed exactly as they have been for centuries _ and with no plans. Very few nails are used but instead ?mangrove? plugs. The teak comes from the forests of the nearby Kayah State. Once the boats are launched they are used for three to four months before their owners return to boatyard, where two coats of lacquer will be applied.
This area is also famous for lotus-thread weaving, Shan shoulder bags, beautiful thick Shan longyis as well as the production of cheroots. 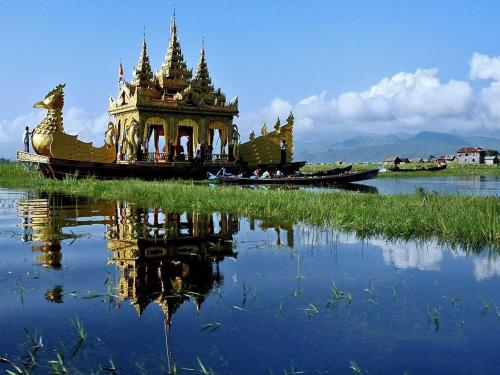 The lake is as richly endowed with pagodas and monasteries as anywhere else in Myanmar. In particular, the Phaung Daw U Pagoda is regarded (with the Shwedagon in Yangon and the Shwezigon in Bagan) as one of the country?s three principal shrines. Along the corridor leading to the pagoda are a variety of stalls, some selling Shan handicrafts, others various antiques and knick-knacks. This pagoda houses five small Buddha images whose original forms have long since been lost under years of plastering with gold leaf by pilgrims. Once as year, at the September full moon, there is an elaborate festival during which the Buddha images are rowed around the lake to visit outlying pagodas. 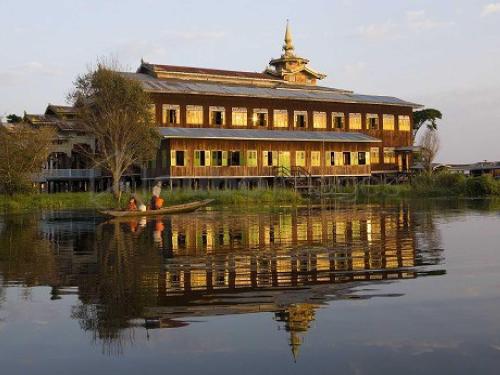 One of the most eye-catching sights on the lake used to be the Nga Phe Chaung Monastery. A large many-sided wooden building, it rose out of the calm, blue water of the lake, its corrugated roofs sparkling in the midday sun. Now that the lake?s water level has dropped so dramatically, the monastery is sometimes surrounded by vegetation and is practically on dry land. The pleasing large interior space remains intact, with the wide, polished teak boards and central platform filled with fine Buddha images. Although some of the magic has evaporated it is still an interesting building to visit.
A canal on the south-west of the lake leads to the village of Indein_ a lovely forgotten area with profuse vegetation _ wild cosmos and ginger plants flowering in March. Once off the boat a walk through the village and across a couple of fields to the 16th century Indein Pagoda which is nothing very special, but it is the area which is full of atmosphere. The hill side was once the site of some 2042 pagodas and small stupas with today around 1054 remaining. They are mostly built of the local sandstone bricks in the Shan style-in all states of disrepair, while some have been restored.